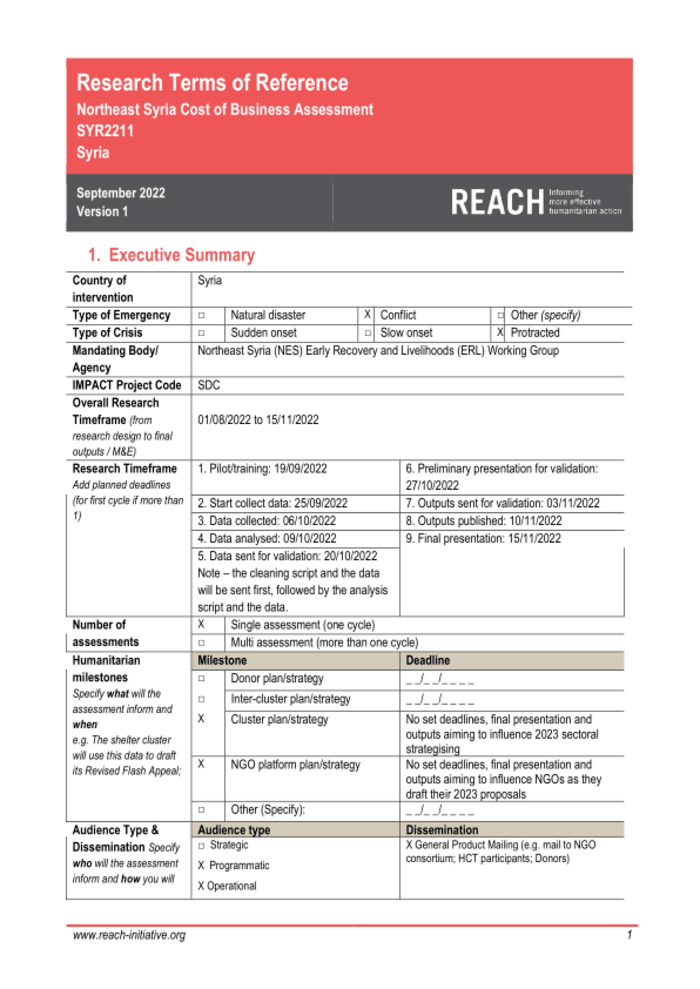 Economic activity in Syria has halved since the start of the conflict in 2011 due to major losses of human capital that have disrupted social and economic networks, destroyed infrastructure, degraded basic services and disrupted trade4. suffered from COVID-19, prolonged droughts and changing weather conditions, rapid currency depreciation, high inflation and the ripple effects of the crises in Lebanon, Turkey and Ukraine. These factors have contributed to driving up the prices of basic commodities and fuel, significantly eroding the purchasing power of the population, one of the main drivers of humanitarian needs. 5 A multi-sectoral needs assessment in 2021 showed that a majority of NES respondents said they could not afford essential items in the market where prices are highly volatile.6 According to the Joint Monitoring Initiative the Syrian market, the price of the food component of the minimum subsistence expenditure basket in the NES has increased by 70% over the past six months.7 Insufficient income and lack of employment opportunities force households in the NES to resort to negative coping strategies, including borrowing money to buy food or other essentials, sending child labor and buying items on credit.8 Recent labor market assessments work under the NES revealed that more than two-thirds of respondents in both Al-Hasakeh city and Ar-Raqqa city said that the lack of employment opportunities prevented them to find u n job, while another – one-third of respondents in both cities cited strong competition for jobs as a major barrier to finding a job.9 In addition, 38% of respondents in ArRaqqa and 22% of respondents in Al-Hasakeh said they wanted to start their own business but lacked the resources to do so.
In this context, the Economic Recovery and Livelihoods (ERL) NES sector has prioritized the implementation of livelihoods interventions to help households meet immediate needs and assist socio-economic actors. -economics, including individuals and MSMEs, to drive local economic activity and job growth within the targeted timeframe. This has involved, among other activities, the provision of cash grants to enterprises, so far mainly focused on micro and small enterprises. In a bid to broaden and better target this support to include a wider variety of business sizes and sectors, ERL actors need more information on the real operating costs faced by MSMEs. in NES in different sectors, as well as on the main challenges that business owners face in maintaining or growing their businesses.

4 reasons to take out a personal loan for debt consolidation