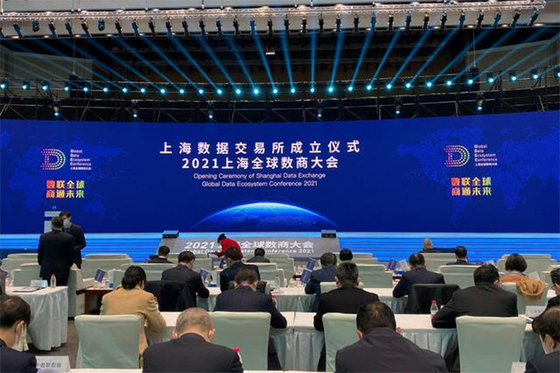 The first batch of products came from companies including the country’s three largest telecommunications operators – China Mobile, China Unicom, China Telecom – as well as Cosco Shipping Technology, UnionPay Advisors and JD Technology, according to the SDE website (link in Chinese).

The exchange is run by state-owned enterprises and investment firms, including Shanghai Alliance Investment Ltd. and Shanghai Information Investment Inc., and has signed around 100 entities, including China Eastern Airlines, UCloud and big names overseas such as Deloitte and PricewaterhouseCoopers.

The goal of the exchange is to provide a single unified platform to seamlessly connect buyers and sellers of data from a range of sources, with all of the products required to pass a compliance review prior to be able to be listed on the exchange. At this time, the settled prices of the transactions are not published.

One of the first transactions was between the Shanghai branch of the Industrial and Commercial Bank of China and State Grid Shanghai Municipal Electric Power Co., the latter selling a dataset that included an analysis of the energy consumption of companies. and payment trends.

This data can serve as a benchmark for commercial banks when examining a company’s trading conditions during credit reviews for loans and lines of credit, according to State Grid Shanghai.

All information processed was limited to that of company users and did not include any sensitive or personal information, according to State Grid Shanghai. Before being listed on the stock exchange, data products must be authorized by the relevant companies and pass an internal assessment by their data security teams, third-party law firms, external assessment agencies and the SDE, a he declared.

The emergence of data interchange around the world has been viewed by some as a ‘modern day gold rush’ as ​​the rise of the digital economy pushes businesses and organizations to find, use and share ever more comprehensive information packages.

However, navigation has not always been smooth. In 2018, the Copenhagen City Data Exchange, which was launched in 2016 as a public-private collaboration to share data held by public authorities and private companies, was forced to close due to lack of demand.

Some of the concerns included access to commercially sensitive data by competitors and difficulties in preventing third parties from buying and reselling it, as well as the inability of some sellers to turn raw data into useful information, according to one. to study published by the government of Greater Manchester in the United Kingdom

Additionally, with sales of datasets typically being organized on a case-by-case basis through negotiations between buyers and sellers, the exchange itself has become obsolete, the study found.

However, confidence remains high for the Shanghai platform, with He Yuan, executive director of the Data Law Research Center at Shanghai Jiao Tong University, saying the exchange places a strong emphasis on regulating transactions and it could in the future be extended to reproduce a stock market model.

The launch follows that of the Beijing International Big Data Exchange Center in March, after the plan was accelerated with a directive published last April by the Communist Party’s Central Committee and State Council, which listed data as a key factor of production alongside land, labor, finance and technology.

The data flow will also contribute to innovation and boost China’s openness and development Digital Economy, which reached 39.2 trillion yuan ($ 6 trillion) in 2020, accounting for 38.6 percent of the country’s GDP and up 9.7 percent year-on-year, according to an April white paper released by the Chinese Academy of Information and Communications, supported by the state. Technology.

This month, China formally applied to join the Digital Economy Partnership Agreement, citing the decision as being in line with the country’s orientation to “deepen national reforms” and “strengthen cooperation with member states in the field of the economy digital technology as part of a new development model, as well as to promote innovation and sustainable development. “

To download our app for getting late-breaking alerts and reading news on the go.

To have our free weekly newsletter must read.

You have accessed an article available only to subscribers

How government can simplify standards to make e-commerce thrive

Genpact expands its experience business, Rightpoint, with the acquisition of Hoodoo…