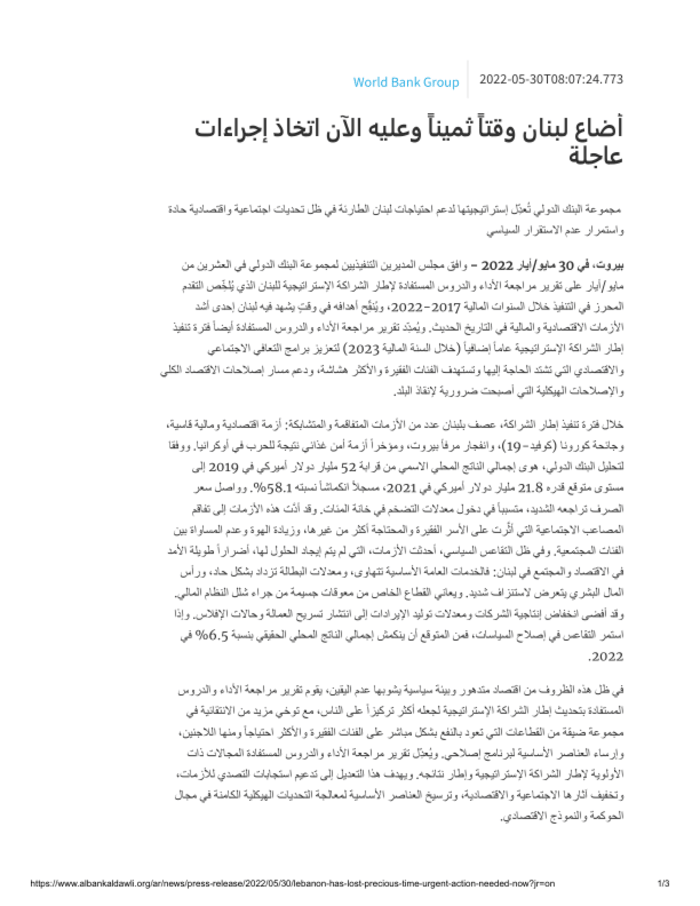 Beirut, May 30, 2022 – The Board of Directors of the World Bank Group approved on May 20 the Performance and learning review (PLR) of Lebanon’s Country Partnership Framework (CPF) which summarizes the progress of the implementation of the CPF during the 2017-2022 financial years and refines its objectives at a time when the country is experiencing one of the economic crises and financial disasters in recent history. The PLR ​​also extends the CPP period for an additional year (to FY2023) to advance urgently needed socio-economic recovery programs targeting the poor and most vulnerable and support macroeconomic reforms. and structural structures urgently needed.

During the period of the PCF, Lebanon was beset by complex and overlapping crises: a severe economic and financial crisis, the COVID-19 pandemic, the explosion of the port of Beirut and, more recently, a crisis food security following the war in Ukraine. According to analysis by the World Bank, nominal GDP fell from nearly $52 billion in 2019 to $21.8 billion in 2021, marking a contraction of 58.1%. The exchange rate continued to deteriorate sharply, keeping inflation rates in three digits. The crises have exacerbated social hardship, disproportionately affecting poor and vulnerable households and reinforcing inequalities. In the face of political inaction, unresolved crises have left lasting scars on the Lebanese economy and society: basic public services are failing, unemployment continues to rise and human capital is severely depleted. The private sector is severely constrained by a crippled financial system. Declining business productivity and revenue generation have led to widespread layoffs and bankruptcies. Assuming no further policy reform, real GDP is expected to contract by 6.5% in 2022.

In this context of economic collapse and uncertain political configuration, the PLR ​​updates the CPF by making it more people-centred, exercising greater selectivity in a narrow set of sectors that directly benefit the poor and most vulnerable, including refugees, and preparing the basis for a reform agenda. The PLR ​​revises the priority areas of the CPP and its results framework. The review aims to strengthen the response to crises and mitigate their socio-economic impact and prepare the ground to address the underlying structural challenges in terms of governance and economic model.

Progress in achieving the PCF’s objectives has been modest on several fronts given the current governance challenges and the deliberate political inaction of the political class. In response to emerging priorities and needs, the World Bank restructured and reprogrammed its portfolio by canceling underperforming projects and proactively allocating resources to newly identified priorities through an emergency-focused response, recovery and resilience. This included: emergency COVID-19 aid to equip hospitals for emergency care and deployment of the COVID-19 vaccine; a targeted cash transfer program to support extremely poor and vulnerable households; support for small and medium enterprises affected by COVID-19 and the explosion of the port of Beirut; smallholder support vouchers to support agricultural production; and an emergency food security project to ensure availability and access to food grains for the poor and vulnerable, including refugees.

The World Bank Group has also leveraged its relationship with the donor community, through its close coordination with the UN and the EU, to conduct a Rapid damage and needs assessment (RDNA) immediately after the explosion of the port of Beirut and established the Framework for reform, recovery and reconstruction of Lebanon (3RF), followed by the training of the Lebanon Financing Facility (LFF) a multi-donor trust fund to channel financial support to implement 3RF priorities. The LFF has already launched several interventions that address the recovery needs of micro and small enterprises, the social recovery needs of affected population groups, the reconstruction of housing and the rehabilitation of cultural and creative industries in damaged neighborhoods and, lately, solid waste management interventions and the environment. recovery activities in the areas affected by the explosion.

The PLR ​​also seeks to learn from implementation experience to improve both the implementation of the existing portfolio and the quality of potential new projects. Key lessons learned include the need to support basic service delivery, allow flexibility in project design, strengthen inter-agency coordination for reform implementation, form strong partnerships, rebuild the social contract through accountability and oversight of priority reforms, institutionalize decentralized delivery mechanisms and maximize the impact of third-party monitoring agents in project implementation.

“Despite early warnings, Lebanon lost precious time and many opportunities to embark on the path of reforming its economic and financial system. The cost of inaction is colossal not only on the daily lives of citizens, but also on the future of the Lebanese people,” said Saroj Kumar Jha, World Bank Regional Director for the Mashrek. “Two and a half years into the crisis, Lebanon has yet to launch a comprehensive reform and recovery program to prevent the country from sinking further. The deliberate and continued delay in tackling the drivers of the crisis poses a threat not only at the socio-economic level, but also a risk of systemic failure of state institutions and pressure on an already fragile social peace.“

The PLR ​​relies on Systematic country diagnosis (SCD), the recent Lebanon Economic Monitors (LEM) and the recent Risk and Resilience Assessment (RRA). It has also benefited from extensive consultations with various stakeholders, including government, civil society, the private sector and the international community.

The main constraints to development in Lebanon identified in the SCD remain: capture by the elite behind the veil of sectarianism; and exposure to conflict and violence. They have created a fragile and dysfunctional political system and a state that has been unable to isolate political conflict from its ability to govern and exercise authority. Crisis management illustrates how governance capacities have eroded and the political paralysis that elite capture has brought about. In this context, the PLR ​​builds on three potential scenarios in which a new political settlement can evolve — political stalemate, minimal consensus, and political change. Each scenario imposes a different set of constraints and opportunities for World Bank engagement.

To move forward, and as requested previously, Lebanon must urgently move forward with the adoption of a credible, comprehensive and equitable macro-financial stabilization and recovery plan and accelerate its implementation. work if it wants to avoid a complete destruction of its social and economic networks and immediately stop the irreversible loss of human capital. As detailed in previous editions of the LEM, this strategy would be based on: (i) a new monetary policy framework that would restore confidence and exchange rate stability; (ii) a debt restructuring program that would ensure short-term fiscal space and medium-term debt sustainability; (iii) a complete restructuring of the financial sector to regain the solvency of the banking sector; (iv) gradual and equitable fiscal adjustment to regain confidence in fiscal policy; (v) growth-enhancing reforms; and (vi) enhanced social protection.

As Lebanon’s governance continued to deteriorate during the implementation of the CPF, some institutional positives may have provided a level of transparency and accountability to government departments and instilled citizen confidence. Examples include the Rafic Hariri University Hospital and IMPACT, the central inspection IT platform. Going forward, building and strengthening institutional capacity is essential and requires investment in time, training and financial support to strengthen public administrations and ensure sustainable development.

Substantial efforts are needed to advance the governance reform agenda. This is all the more essential to renew the social contract and repair the broken relationship of trust between citizens and the state, especially at this delicate moment. Public procurement reform, public financial management reform, strengthening parliamentary financial control and the independence of the judiciary are some of the key areas on this front.

As the World Bank continues to channel portfolio resources into projects that directly contribute to saving lives, protecting the poor and most vulnerable, and preventing the collapse of basic services, it is also preparing a series of studies analytical and sectoral strategies to inform reforms that can catalyze Lebanon’s private sector-led recovery and reconstruction.

The era of borderless data is coming to an end, as governments step in