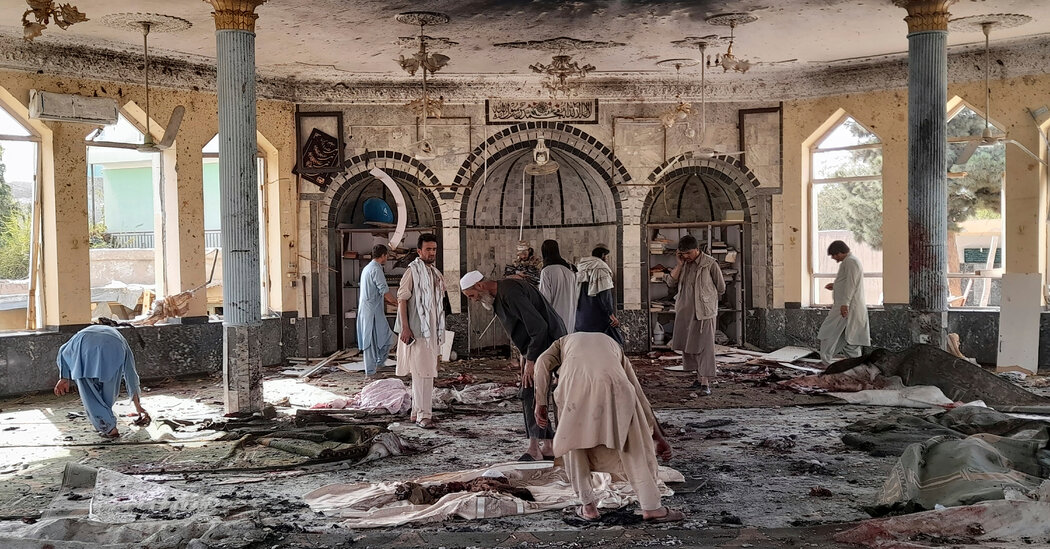 KABUL, Afghanistan – An Islamic State suicide bomber on Friday devastated a Shia mosque in Kunduz, northern Afghanistan, killing dozens of worshipers in the terror group’s murderous continuation of the campaign against the Hazara minority.

The massacre, when the mosque was packed for Friday prayers, was the group’s second attack on a mosque in just days. And it was the realization of the fears of the Afghan Hazaras that Islamic State predation would get out of hand under the Taliban, who have themselves preyed on the Hazara in the past.

Testimonies described a powerful explosion with numerous casualties. Matullah Rouhani, a Taliban official in Kunduz, told local media that at least 43 people were killed in the attack and more than 140 were injured.

A local leader of the Shiite community estimated the death toll to be much higher. Sayed Ahmad Shah Hashemi, who represents the Shia population of Kunduz province, told the New York Times that more than 70 people were killed in the attack.

“This fatal incident caused trauma among Shiites and other sectors of society,” Hashemi said.

Hours after the attack, it was claimed by Islamic State Khorasan, also known as ISIS-K. It is the group’s deadliest strike since the suicide bombing at Kabul International Airport on August 26, which killed around 170 civilians and 13 US soldiers.

ISIS-K is a Sunni extremist group that has long targeted Shia Muslims in Afghanistan, with a strong focus on the predominantly Shia, Hazara ethnic minority. Most of Afghanistan is Sunni, and ethnic Pashtuns – who make up most of the Taliban’s ranks – are a plurality in the country.

ISIS-K also organized an attack several days ago outside a mosque in the capital Kabul, which left several dead.

In the months leading up to the withdrawal of US forces from Afghanistan, some 8,000 to 10,000 jihadist fighters from Central Asia, the North Caucasus region in Russia, Pakistan and the Xinjiang region in the west from China flocked to Afghanistan, a United Nations Report said in June. Most are said to be associated with the Taliban or Al Qaeda, which are closely linked, but others are believed to be allies with Islamic State.

Affirming the attack on Kunduz on Friday, the ISIS-K statement said the attacker was of Uyghur descent – an oppressed Muslim minority in western China. China has long feared that Afghanistan will become a safe haven for Uyghur militants who may seek to attack the interests of the Chinese government in revenge for its abuses against the Muslim population of Xinjiang.

The newly installed Taliban government, after overthrowing the country’s western-backed administration in August, is struggling to contain a reinvigorated Islamic state. The group has grown increasingly hostile in recent weeks, carrying out guerrilla-style attacks and bombings that have included Taliban fighters among the dead. The new government is also grappling with a collapsing economy as foreign funding remains largely frozen.

As Taliban officials shift from leading an insurgency to forming a functioning state, ensuring the safety of a population ravaged by more than 40 years of war has been their benchmark. But ISIS attacks have undermined the Taliban’s promises.

For Afghanistan’s Shiite minority, the new era of the Taliban has seen a continuation of the predation and violence that has haunted them for decades.

The Hazara have grown increasingly bitter towards the US-backed government of President Ashraf Ghani in recent years, accusing it of doing little to protect them from sectarian massacres. And they watched in horror as the Taliban returned to power: During the civil war of the 1990s and the first Taliban government in Afghanistan, the group made it their business to target the Hazara Shiites.

Bida and Dutch-Bangladesh Chamber team up to boost FDI