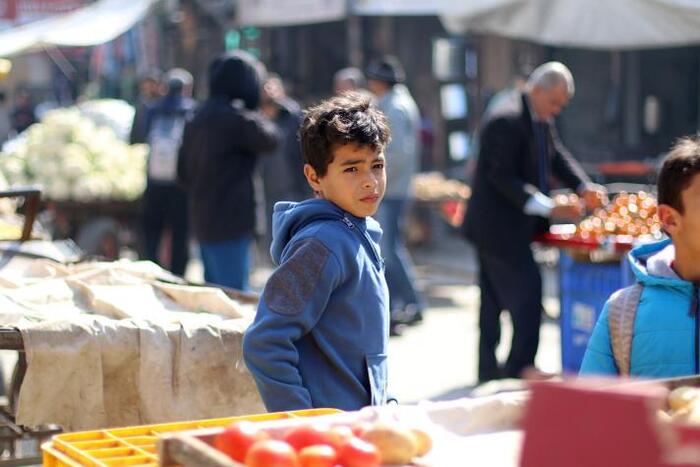 Imagine a strip of land – 41 km long, 6 to 12 km wide – with more than 2 million inhabitants and half of the population of which are children.

A year ago, during an escalation of violence, 67 children were among the 261 Palestinians killed in their homes in the Gaza Strip. At least 12 of them were children enrolled in an EU-supported trauma care program run by the Norwegian Refugee Council (NRC). They had nowhere to run to safety.

Many children in Gaza bear the brunt of violence and live under constant stress. This is why the EU is providing humanitarian aid to improve their situation. But, in the end, only a political solution can end people’s misery.

“We had no gas, heater or battery to light the house, so we fell asleep when the sun went down,” says Nisreen, a 39-year-old single mother of four.

Nisreen’s apartment was damaged during hostilities last year. She was one of 4,720 households that received post-emergency assistance from the EU-funded Consortium for the Protection of Gaza.

With her first cash grant in October 2021, Nisreen paid her rent and managed to reconnect her home’s water and electricity.

“I paid some debts and fees for my son to attend an educational center so he could learn English. The money covered his transport. With the rest, I bought notebooks and pens for his studies. All that was left after paying the rent was 350 shekels [€100]but I covered what my kids needed to study,” she says. “I want to give them everything I have.”

Since that first month, she has been able to repair some of the damage to her house, buy gas for cooking, provide her children with breakfast each day and give them lunch money for school.

“My Choice”: a new type of cash assistance

One of the unique aspects of the Consortium for the Protection of Gaza program, which the EU and other donors support, is that selected families have the freedom to spend the money as they wish, using a debit at any retailer or ATM.

Studies in several countries have shown that cash assistance is the most effective and efficient way to meet the needs of vulnerable people.

Consortium surveys reveal that 8 out of 10 families prefer cash over other forms of support. In fact, the money helps them provide for their children’s basic needs, such as meals and clothing, and increases their children’s self-confidence and school attendance.

The majority of Gaza’s population depends on aid. The blockade imposed on the Gaza Strip since 2007, renewed conflict and political divisions have crippled the economy. People are trapped in a cycle of poverty, unemployment and food insecurity.

Armed conflicts have further destroyed homes, businesses and critical infrastructure. Electricity is only available half the time and the water network is badly damaged, with disastrous consequences for children’s health.

In 2020, Fares was just 10 years old and working to help his struggling family. From October 2020 to August 2021, her family received cash assistance. He stopped working and even took remedial classes at a local education center.

“During the grant period, my children were in excellent psychological condition. They were going to play with the children in the street,” said Fares’ father, Daifallah.

When the scholarship ended, Fares returned to work every night after school. The emergency grant was intended to help families dependent on daily work and informal employment through a difficult time after COVID-19 restrictions further reduced their income.

Fares earns money, giving young children rides in an ornately decorated toy car he and his father built, but which still goes to school.

“Rates are currently working. This greatly affected his studies and his academic level went down,” Daifallah said. “Sometimes he comes home at 11 o’clock at night. Sometimes I’ll be near him to make sure no one is harassing him. I wait for him to finish and we go home together.

The psychological price paid by children living in extreme poverty is often overlooked.

Not having money for lunch can affect a child’s ability to learn in school. Not having decent clothes can affect their motivation to go to school. And the harassment that often accompanies living in extreme poverty and debt can have negative psychological effects.

“My kids and I spend most of our time at home so nobody bullies them. Many children in the area where we live make fun of my children because we are poor, so we are isolated from people,” Daifallah said.

Cash assistance helps families with dignity but also stimulates the local economy by stimulating demand for goods and services.

A study commissioned by the United Nations Relief and Works Agency for Palestine Refugees in the Near East (UNRWA) in 2018 found a significant multiplier effect, with every US dollar spent by aid recipients in cash generating $2.44 of GDP for Gaza’s economy.

Between October 2020 and December 2021, EU humanitarian aid provided a lifeline to more than 4,800 of Gaza’s most vulnerable families affected by severe poverty and emergency situations.

The EU continues to support the Consortium for the Protection of Gaza and other partners who spare no effort to find income opportunities for vulnerable families. Yet in Gaza, this may seem like an uphill battle.

With barely functioning social services, the most vulnerable are without a social or economic safety net. While emergency cash assistance can help them partially break their debt cycle and improve their living conditions, short-term humanitarian assistance must give way to sustainable development and political solutions.

Ultimately, a political resolution that lifts the siege is the only way for vulnerable families in Gaza to “earn a living” rather than “just survive.”