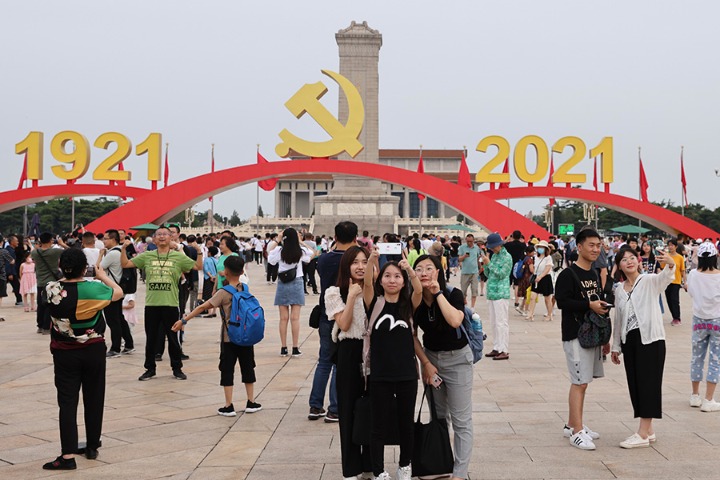 Communist Party of China Central Committee General Secretary Xi Jinping’s speech at the CCP centenary ceremony on Thursday drew recognition and support from domestic and foreign business leaders, who saw it as an encouraging message that the China’s development will create new opportunities. for the world and the country will continue to be a major force in the engine of global growth.

China’s focus on the pursuit of peaceful development, along with its determination to promote high-quality growth and further deepen reforms and openness, further boosted confidence in the world’s second-largest economy, the most senior leaders in the country having pledged to make more notable and more substantial progress towards building a strong and modern socialist country in all respects, experts and business leaders said.

As the country embarked on a new development adventure, the remarks by Xi, who is also president of China and chairman of the Central Military Commission, underscored the trend that the Chinese economy will not only grow, but evolve. also towards an innovative and regulatory economy. based on a market economy that will bring benefits to the common prosperity of the world, they added.

Zhang Yansheng, chief researcher at the China Center for International Economic Exchange, said Xi’s speech is of great significance because he not only announced that China has reached its first centenary goal, that is, said building a moderately prosperous society in all respects and eradicating absolute poverty, but also outlined the main tasks of the Party on the way to achieving the second centenary goal.

“It is not only about achieving the great rejuvenation of the Chinese nation, but also about promoting the peaceful development of the world and building a community of destiny for mankind,” he said.

Zhang said that further successes are expected to emerge in China’s efforts to strengthen its innovation capacity to further unleash the potential of its productivity, major progress in improving the rule of law and modern governance. of the country, and efforts to promote common prosperity after the eradication of absolute poverty. .

Business leaders viewed Xi’s speech as an encouraging sign that China will continue to develop its economy by deepening reforms and opening up, promoting high-quality development and improving its business environment.

â€œOver the past century, under the leadership of the Chinese Communist Party, China’s business environment has been optimized, Chinese consumers have played an increasingly important role in the world economy, and China has become a force. major in global economic development, â€said Saravoot Yoovidhya, CEO of Thai group TCP, owner of the energy drink brand Red Bull.

â€œThanks to the endless opportunities created by the unwavering reform and openness of the CCP, my father, the founder of TCP and the inventor of Red Bull, Mr. Chaleo Yoovidhya, was proud to return to his ancestral homeland of Hainan Province. as China’s reform. and the era of openness took off and established the country’s first Red Bull factory in 1993, â€he said.

Liu Guoping, chairman of the Chinese branch of Orix Group, a Japanese financial services group, said the reform and opening up of China under the leadership of the CCP has enabled the company to expand rapidly in the country. over the past 50 years.

“China’s favorable economic and trade policies, especially in the areas of trade in financial services, have given global companies better access, prompting Orix to invest more and expand its market presence across the country,” did he declare.

Xi’s call to implement the new development philosophy, foster a new development paradigm, and strengthen the country’s strength in science and technology has also boosted business confidence in the prospects of China’s economy fueled by innovation, technological breakthroughs and new types of businesses.

â€œIt was moving and inspiring to hear President Xi’s speech. China has made tremendous strides in becoming a technological powerhouse and the digital revolution, characterized by the rapid maturation of technologies such as AI, 5G, cloud computing and blockchain, will profoundly transform our country in various ways in boosting productivity, â€said Da Hongfei, CEO of Onchain, a blockchain technology startup.

Shao Changnan, chairman of Dalian, Liaoning Province-based DHI-DCW Group Co Ltd, a manufacturer of state-owned machinery equipment, said Xi’s speech was encouraging and the company would step up further. upgrading its technologies to produce smarter industrial equipment. and contribute to China’s goal of peaking carbon dioxide emissions by 2030 and achieving carbon neutrality by 2060.

Zhang Feng, CEO of Dmall, a Chinese digital fresh grocery platform, said the company will strive to seize emerging opportunities in the global development of the digital economy and refine its advantages in the digitalization of retail sales to contribute to the high quality of the developing country and meet people’s desire for a better life.

Zhong Nan and Wang Zhuoqiong contributed to this story.