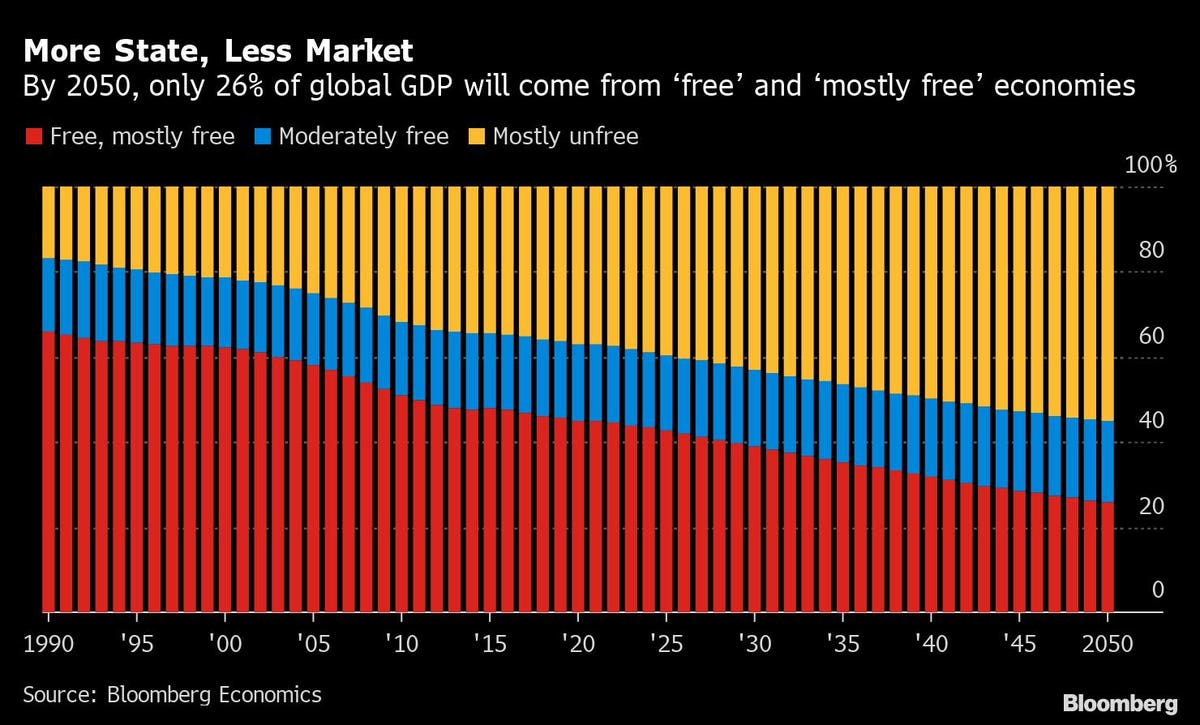 Bitcoin will help save the free market from increased state control

As we close 2021, many of us under COVID-19 bans, having long passed our stimulus checks, we are witnessing the global crypto market capitalization above $ 2 trillion, the S&P closing at all-time high for the 70e times this year, and against a rising annual inflation rate in the United States of 6.8% in November, the highest since June 1982.

Bloomberg Economics released some serious data on us, predicting that only 26% of GDP will come from free market economies by 2050, a number that was closer to 60% in the 1990s.

Milton Friedman must be turning in his grave.

The free market and the Internet

It’s hard to speculate what Friedman, who died in 2006 at the age of 94 and straddling four industrial revolutions, would have thought of bitcoin, crypto assets and the emerging Web3.0 digital transformation of the economy.

I would at least expect that we’d witnessed a wry smile on his face at the thought that a $ 2 trillion economy had been created by people with sleek computing (a pinch genius thanks to Satoshi) and without any support from the state or the financial market, and little positive intervention at the start, all over the course of a decade.

Friedman commented in his day: â€œI think the Internet is going to be one of the main forces in reducing the role of government.

The digital economy will continue to transform the lives of billions of people even before we consider the profound implications of bitcoin and the breathtaking developments in decentralized finance (DeFi), with the digital economy being created in Web30 the metaverse.

The race for digital space

Now is the time for policymakers to fully grasp and engage in the digital space race. The role that blockchain and digital technologies can play in enabling society to create larger, more open, and freer markets and a thriving economy for all citizens, and let crowd power and the free economy prevail .

In mixed capitalist systems, most expect government policy and regulation to protect consumers and businesses from bad actors and criminal behavior. While most people and businesses don’t break the law, launder money, or cheat on their taxes, most people pay for a system that tries to protect us from the few who do. . Having meaningful regulation and compliance in place is what policymakers should strive to achieve, not to protect laws and systems that sometimes show little evidence of success.

The politics and regulation of crypto and digital assets were slow to arrive, as many governments saw the industry largely irrelevant during the first half of the decade, only to berate it in the second. That most policymakers do not understand technology, given its importance to governance and society, is scandalous.

The crypto and digital asset industry has done itself a disservice in promoting an acceptable narrative. Its libertarian message of anti-government and institutional revolution is often at odds with its great social utility and models of democratic governance and sends the wrong message to policy makers. It’s a very fragmented industry and nowhere is this better demonstrated than its response to the US infrastructure bill.

The proposals caught the industry off guard and were not prepared for any major effort on the Hill. On the contrary, it demonstrated how unorganized and underfunded the sector is, compared to the traditional well-funded and well-oiled financial services sector and in particular the banking sector, which has many large players now commercially engaged in some form. or another in crypto and digital. asset sector.

The rise in calls for consumer protection in the largely unregulated crypto and digital asset sector from regulators and central banks has also increased significantly in the past. In a largely consumer-generated market now over $ 2 trillion, you must be wondering who are policymakers trying to protect consumers from?

The concerns of policymakers about financial crime on the blockchain appear off target, crime appears low compared to other digital or analog segments, and government security professionals praise the public blockchain for its transparency in research and research. rapid isolation of assets that are part of criminal activity.

More importantly, it is the broadly interconnected and diverse digital governance models that engage the larger constituents of stakeholders better than many traditional governance models in equity participation – in many cases this looks like a mutual structure to the old one.

Considering the issues ahead with inflation or perhaps stagflation, the arbitrage of COVID-19 vaccines, product shortages, supply chain disruptions and economic recoveries, one would think governments have enough things to focus on instead of choosing bitcoin.

Do not throw the baby out with the bathwater

Instead, consideration could be given to taking a proactive approach, as has been the case with COVID-19 vaccinations, where governments and private industry worked together to solve a time bomb. Why not take the fast-track approach to testing COVID-19 vaccinations and apply it to blockchain and products in the crypto and digital asset industry.

Calls for a safe harbor and industrial sandboxes for the crypto and digital asset sector, to enable products and services to be tested off-market, in a reduced-risk environment, similar to accelerated testing drugs from COVID-19 vaccinations are a way for governments to work better with industry’s private money and capital to solve big societal problems.

Governments are advised not to throw the baby out with the bathwater when it comes to the policy and regulation of crypto and digital assets.

Bloomberg Economic analysis is a good hit on the arc of free market policymakers everywhere. For the champions of free markets, seeing democracy continue to decline a year later is not good news. That it often appears that the allies of the United States are leading the undemocratic charge deserves attention.

The last word on this subject belongs to Friedman: â€œThere is only one and only one social responsibility of the company: to use its resources and to engage in activities designed to increase its profits as long as it respects the standards. rules of the game, which is to say, engages in open and free competition without deception or fraud.

My best wishes to you and yours and may 2022 be your best year.

Once again, IT is raiding Kannauj, raiding the locations of two major perfume merchants, including Pammi Jain, near Akhilesh Yadav