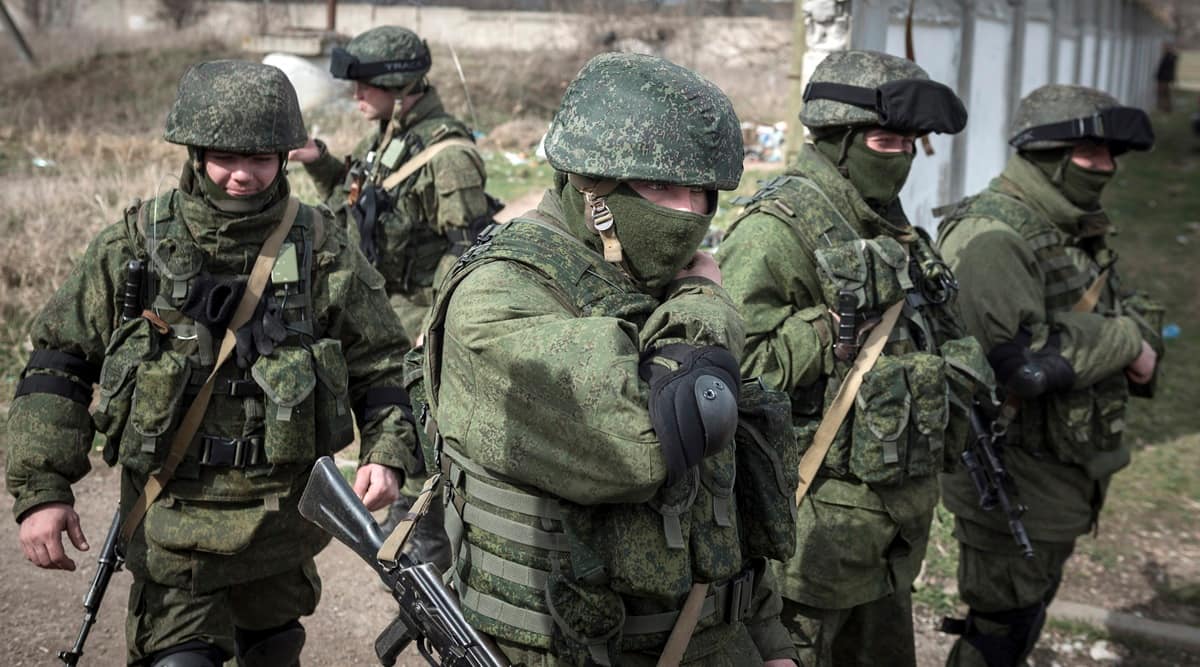 As shelling hit towns in eastern Ukraine on Saturday and civilians boarded buses in a chaotic evacuation, Russia put on a spectacular show of military theatre, testing missiles ballistic and cruise weapons to remind the West that a conflict over Ukraine could quickly escalate.

In eastern Ukraine, where Russian-backed separatists claimed, without evidence, that Ukraine was planning a large-scale attack, separatist leaders urged women and children to evacuate and able-bodied men to prepare for battle.

Western leaders have derided the idea that Ukraine would launch an attack while surrounded by Russian forces, and Ukrainian officials have dismissed the claim as “a cynical Russian lie”. But the erupting panic was an ominous sign of what the United States has warned could be a pretext for a Russian invasion. President Joe Biden said Friday that Russian President Vladimir Putin has already decided to invade Ukraine.

Western leaders there displayed a united front and made repeated calls for a diplomatic resolution. Vice President Kamala Harris called the crisis a “defining moment” for European security and the defense of democratic values.

But Putin has sent his own message, presiding over nuclear-capable missile tests as part of what Russia insists are just military exercises around Ukraine and not the precursor to an invasion.

Tensions between the United States and Russia have not been this high since the Cold War, and Saturday’s Russian nuclear exercises appeared carefully timed to deter the West from direct military involvement in Ukraine.

In Munich, Harris warned that if Russia invaded Ukraine, the United States and its allies would target not only financial institutions and technology exports to Russia, but also “those who are complicit and those who help and direct this unprovoked invasion”.

“Russia continues to pretend it is ready for talks, while narrowing the avenues of diplomacy,” she said. “Their actions just don’t match their words.”

Zelenskyy, who flew to Munich for a few hours despite US fears he might not leave the Ukrainian capital, Kyiv, impatiently urged Western leaders to take stronger action now.

“What are you waiting for?” He asked. “We don’t need your sanctions after ‘the economy collapses and’ parts of our country will be occupied.”

He made it clear that Ukraine would continue to seek NATO membership and blamed the West for not being honest about whether it would really welcome Ukraine into the alliance.

In Ukraine, shelling has intensified in the east, where Russian-backed separatists have battled government forces in recent days.

Artillery fire has intensified along the entire length of the frontline, the Ukrainian Interior Ministry said on Saturday. The shelling was roughly double the level of the previous two days, the ministry said.

The Ukrainian military said two soldiers were killed and five injured in fighting in the area.

Several intense artillery barrages targeted a pocket of government-controlled territory around the city of Svitlodarsk, a location that has worried security analysts for weeks over its proximity to dangerous industrial infrastructure, including storage tanks for toxic gases.

Residents of the separatist Luhansk region, who said both sides had shelled in recent days, feared the escalation.

“I have a little baby,” said Nadya Lapygina, whose town, Staryi Aidar, was hit by artillery and mortar fire. “You have no idea how scary it is to hide it from the shelling.”

There were also alarming signs of what US officials described as possible precursors to a pretext for a Russian invasion. The leaders of the Russian-backed separatists in eastern Ukraine on Saturday appealed to all men in the territory they control to sign up to fight.

The separatists, seen by the West as Russian proxies, on Friday called on 700,000 women and children to evacuate the area, saying Ukrainian government forces were planning a full-scale attack.

On Saturday, Denis Pushilin, leader of a pro-Russian breakaway region, the so-called Donetsk People’s Republic, called on all able-bodied men to prepare for battle.

“I call on all men in the republic who are able to hold arms in their hands, to defend their families, their children, their wives and their mothers,” he wrote on social media.

The Ukrainian government denied any plan of attack, and the United States dismissed the accusation as a lie intended to give Russia a pretext to launch an invasion.

So did Germany’s new Chancellor, Olaf Scholz, who dismissed Russian claims of Kiev’s ‘genocide’ in the eastern Donbass region as ‘really ridiculous, to be very clear on that’. .

A Russian entry into Ukraine would be a “serious mistake” that would have immediate and serious “political, economic and strategic” consequences, Scholz said at the Munich Security Conference. “Nothing justifies the deployment of more than 100,000 Russian troops around Ukraine. No country should be another’s backyard.

Similar warnings have been issued by British Prime Minister Boris Johnson and European Commission President Ursula von der Leyen. She promised a serious set of financial and economic sanctions against Moscow in the event of aggression, which “could cost Russia a prosperous future”.

Even Chinese Foreign Minister Wang Yi, in a strikingly distancing comment from Russia, said each country’s sovereignty, independence and territorial integrity should be safeguarded. “Ukraine is no exception,” he said during a virtual appearance at the Munich conference. But he also urged the United States to stop making “hyperbolic warnings” about Russian intentions.

Separatist warnings of an impending attack have led to real scenes of chaos at bus depots in eastern Ukraine.

Inna Shalpa, a resident of the separatist town of Ilovaisk in the Donetsk region, had no idea where the Russian bus she and her three children were going was going, but she was ready to accept the uncertainty to flee an expected war.

“We were mostly worried about the children,” said Shalpa, 35, amid a frantic effort to distribute the refugees among buses, parked outside Russia’s first train station across the border.

On Friday, Putin ordered the government to pay each refugee $130, and Russia’s Rostov region, which has several crossing points with separatist areas, declared a state of emergency.

The Russian missile tests, three ballistic missiles and cruise missiles, were designed to have media impact. Putin watched the display from a Kremlin command center, accompanied by President Alexander Lukashenko of Belarus, whose government brutally suppressed dissent after a disputed election and is considering letting Russia base some of its nuclear arsenal on its territory .

The test was technologically unremarkable, with videos released by Moscow showing a fighter jet launching a cruise missile from the air, a mobile launcher firing an intercontinental ballistic missile and a sea-launched hypersonic missile.

While the weapons demonstrated on Saturday have already been shown, two of the three were designed to evade US missile defenses. The Kremlin said the test was designed to show the Russian “triad” – launches from land, air and sea – which mirrors the range of weapons in the US arsenal.

The heightened sense of urgency expressed by Washington was not immediately apparent in Kiev, although Biden explicitly identified the capital as a Russian target. The idea of ​​Russian forces storming what is currently a calm and peaceful town was hard to imagine for many people there.

“Russia will do something,” said Sofiya Soyedka, 32, a resident of Kyiv, right after Biden’s dire warning on Friday.

But invading Kiev? “No way,” she said.

Some of the officials gathered in Munich also expressed doubts, suggesting that Putin might prefer longer pressure on Zelenskyy and Ukraine, creating provocations and anxiety and continuing to damage Ukraine’s economy. Such tactics, they suggested, would make it harder for the Europeans to impose harsh sanctions on Russia and could damage the transatlantic unity on this issue that American and European diplomats have so painstakingly built.

Biden’s televised address on Friday night was the first time the president had said he believed, based on intelligence and troop movements, that Putin had decided on a major invasion of Ukraine “within a week to coming, in the next few days,” adding that “we believe they will target Ukraine’s capital, Kyiv, a city of 2.8 million innocent people.

US officials said Biden’s assessment was based in part on new intelligence showing nearly half of Russia’s 150,000 forces were out of staging and in combat formation, and could launch a full-scale invasion. scale in a few days.

The force comprises 120 to 125 battalion tactical groups, up from the mid-1980s at the start of the month. And some of the forces are Russian reservists who would constitute an occupation force after an invasion, said the officials, who requested anonymity to discuss government assessments.

DoorDash vs. Uber Eats: Who wins the food delivery war?