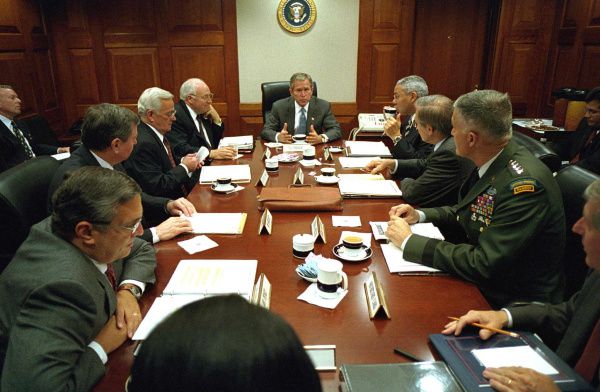 This column is part of an opinion piece commemorating the 20th anniversary of September 11: We live in a 9/12 world.

What happens there matters here.

This day was the result of a calculating preparation of people who felt threatened by our way of life. Terrorists weren’t mad at the bricks and mortar in New York or Washington. They declared war on our economic, political and religious freedoms.

After September 11, we stood up for our values. Today, however, as the United States shows reduced willingness to engage globally for freedom, the despots are happy to fill the void.

Not only is this war on our way of life still simmering, but the theater has grown. Iranian extremists are still there and they have been reinforced, showing their true colors as their proxies Hamas, Hezbollah and Houthi continue to threaten their neighbors. Likewise, the Taliban have filled the void created by our withdrawal from Afghanistan, and freedom will suffer, especially for women and children.

By abandoning Afghanistan in the manner chosen by our government, we have simultaneously abdicated our commitments and armed the enemy. Opponents around the world are watching the precedent we are setting. It should come as no surprise that China, Russia and Iran were the first to offer aid to the Taliban. This hardly inspires confidence that peace and stability will follow.

China has already filled the void elsewhere. Its Belt and Road initiative and the Asian Infrastructure Investment Bank are monetary tools for buying influence. The world has looked the other way as China abuses religious minorities, violates its promise to Hong Kong and militarizes the South China Sea.

In addition, freedom is shrinking in countries where elections appear to be open. Countries like Turkey, Poland, Hungary, Brazil and El Salvador are the last places where elected leaders undermine fundamental freedoms of the press and independent judicial systems. These join Venezuela, Bolivia, Cuba, Belarus, Russia, China and North Korea as states where freedoms are already restricted.

According to Freedom House, the world has experienced 15 consecutive years of decline in freedom. Today, most of the world’s population lives without fundamental freedoms.

It is not too late to reaffirm the value of American leadership. Simply saying that “America is back” is not enough. Our return must be guided by basic principles that the world can see.

First, we must have confidence that the United States is a force for good in the world.

Our soft power should not be dismissed: it competes with our military power. The strategic use of foreign aid, as we have done with President Bush’s PEPFAR program, which has saved some 20 million lives in Africa from HIV / AIDS, leads with compassion and decency. Vaccine diplomacy is the opportunity of the day, so kudos to the Biden administration for committing to this front, though the effort has been too timid. These programs not only reinforce our values, but also show the world the fruits of our economic and political system.

Second, we must have the courage to do the right thing, no matter where we get involved.

As the precipitous withdrawal of troops from Kabul before the extraction of hundreds of American citizens and thousands of our partners in the country demonstrated, when we act irresponsibly, the world notices. China was quick to challenge our competence to protect Taiwan immediately after our retreat. We are a strong, proud and moral country, and we must act on it.

Third, we must support those who struggle for freedom and democracy in the world.

While we cannot intervene militarily everywhere, neither should we allow freedom fighters to dry up. Unequivocally, declaring our support for Cubans and Venezuelans on the streets, supporting the Ukrainians in not approving the Russian gas pipeline to Germany and offering full support to the Israelis bombed by their neighbors would go a long way in lifting those who are in first place. line. As a model of how humanity has been brought forward by freedom, democracy and capitalism, if we don’t stand up for these values, who will?

Fourth, we must face our adversaries where the battles are taking place.

We will not be taken seriously as a world power if we do not defend our national interests when challenged by adversaries, wherever conflicts occur. Today, battles are fought on the Internet in addition to the field. Cyber ​​terrorists are no different from the 9/11 bombers. They seek to inflict damage on us.

We must reaffirm the Bush principle of not distinguishing between terrorists and the countries that harbor them. Chinese and Russian companies are behind cyber attacks against our businesses and critical infrastructure. Authoritarian regimes are not guided by the same values ​​as we are, and we should not treat them as if they are.

Finally, we need to get our own house in order.

In order to project our values ​​abroad, it is essential that our national institutions function. Our elected officials must meet the challenges with decency and civility while finding viable solutions to our main problems. Irresponsible and irresponsible spending that increases dependence on government does not help restore confidence in our governing institutions. At the same time, our leaders continue to prove that they cannot fix a dysfunctional immigration system, provide an education system capable of training for the jobs of this century, or convincingly modernize the nation’s public infrastructure. It’s no wonder Congress has a 12% approval rating.

When we abdicate our leadership role, nefarious actors fill the void and freedoms are lost. We will have only ourselves to blame when we are forced to respond to greater challenges in the world when our way of life is threatened.

Twenty years ago, Bush told the nation that “we will not grow weary, we will not falter and we will not fail” by doing all we can to ensure that events like 9/11 do not happen again. American soil. Determined and resolute leadership based on the values ​​of freedom, opportunity, responsibility and compassion has served us well and it still can. We owe it to those whose memories we honor every year on September 11.

Kenneth Hersh is Managing Director of the George W. Bush Presidential Center. He wrote this column for The Dallas Morning News.

Gold, Stablecoins in the Age of Stagflation

The “Taste of Huron” program will be relaunched